My Experience with the Prototype Steam Hardware

On the 12th of November I received an email from Valve letting me know that I had been selected as a participant for the Steam hardware prototype beta.

Congratulations! You have been selected to receive one of the initial 300 prototype Steam Machines and Steam Controllers built by Valve! You were hand-selected to participate along-side a set of users selected randomly from a pool of over 400,000 users who completed the Eligibility Quest. We suggest that you also buy a lottery ticket this week, because you’re clearly a lucky person.

Initially I thought somebody was playing a joke on me, but after verifying it with someone from Valve it turned out to be the real deal, I was hand-chosen based on my community contributions and previous work I’ve done with Valve. It took a couple of weeks, but eventually a giant wooden crate arrived at my doorstep containing a prototype Steam Machine and Controller. These are Valve’s attempts at breaking into the console market so I was pretty excited to test them out.

The Steam Controller is unlike anything I’ve ever used before, and at first it’s a little bit confusing. I’m not a stranger to gamepads and so far this is the most interesting one I’ve used. I wish there was some sort of interactive demonstration available when you first use it as it can be rather overwhelming.

The first challenge the controller presents to you is entering your account credentials. This is like throwing you into the deep end especially if you’re using a secure password. SteamOS uses the daisywheel chat interface from Big Picture mode and it utilizes both sides of the controller. I will admit at first I struggled with it, however after numerous login attempts I’m now a lot faster. 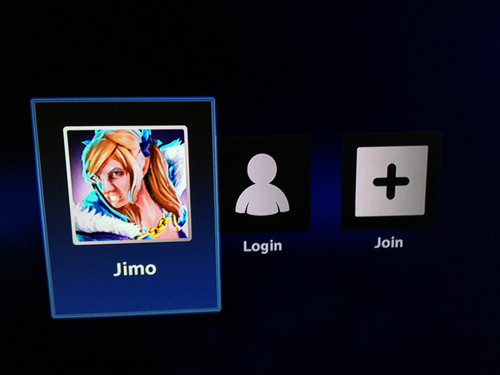 The second challenge is figuring out what does what in a game. Most games come with a set of predefined controller bindings. I quickly learned that you need to change these as they usually don’t make much sense. I was a little jaded after trying TF2 with the predefined bindings, but after creating my own things were much better.

It wasn’t until I started creating my own controller bindings that I discovered how configurable the Steam Controller actually is. I was not aware that you could adjust the blending or the dead zone settings. I also didn’t know you could change the style of input from a 4-way directional to an 8-way directional, allowing it to hold eight key bindings on a single pad.

There’s even a way to modify the outer ring of the pad which can be useful for games that require multiple inputs at once to be effective. An example of this is crouch walking.

One of the most important things to consider when configuring the Steam Controller is the sensitivity. There is no way to adjust sensitivity through the default SteamOS interface in the current build. It must be changed within the settings menu of each individual game, which can be a problem if the game doesn’t have it as an option.

Because of the way the Steam Controller simulates a mouse it can be rather sluggish if the mouse sensitivity is left at the default value. Like most games, the mouse sensitivity slider in Portal 2 starts off at around 50%. I’ve read a lot of comments on the Steam Controller where people believe their thumbs could become fatigued from too much use of it. In the first video you’ll see that it takes me several swipes over the pad to move the gun around and it does feel tiresome after a while. For a lot of FPS games this setup is very impractical and doesn’t allow for quick reactions.

I wanted to test the opposite so in the next video I cranked the sensitivity slider to 100%. This was far too sensitive and you can even see twitch-like movements on the screen due to my thumb slightly shaking over the pad. I can see some situations where this might be useful, but for me personally I felt having it so sensitive was more of a hindrance.

In the final configuration I set the slider to around 75%. This is definitely my preferred setup, it gives you enough mobility and allows you make precise movements. I’ve tested a similar level of sensitivity on a lot of different games now and I feel that this works best for me.

The Steam Controller works fine for First Person Shooter games, but despite the criticism I’ve been determined to come up with a playable controller configuration that works with RTS games too. I have been casually playing Wraith-Night since I got the Steam Machine and I think I’ve found a combination that works quite well. With the expected release of custom game modes in Dota 2 I think the Steam Controller could be a popular choice for these types of matches. 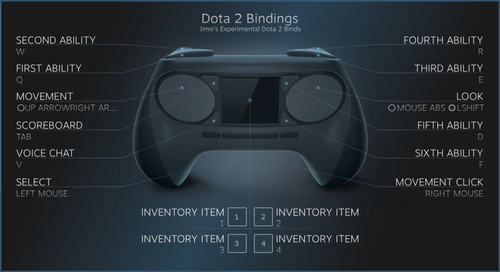 For the left pad I’ve set the input mode to 4-way directional with blending turned on, this allows me to make diagonal movements with the camera. I’ve also set a double click function that centers the camera on my hero. The reason I chose double click is due to how many times I accidentally clicked the button while moving my camera around. 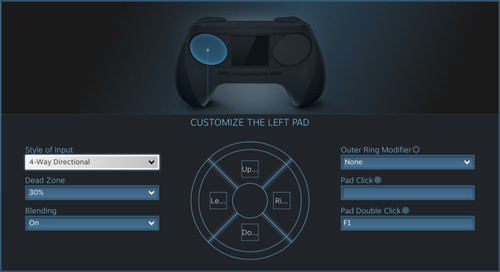 I’ve put together a gameplay video of me playing Wraith-Night with the Steam Controller on normal difficulty. The video only goes up to round seven as my memory card couldn’t hold anymore space. In the video you’ll be able to tell that I struggled to react quickly to certain situations and I also made a fair number of newbie mistakes. I believe most of my struggles come down to the fact that I’m still relatively new to the Steam Controller, and making the jump from a mouse and keyboard is difficult at first. Although this begs the question, is the learning curve for this controller too high?

I’m not really sure where to start with SteamOS. It’s strange, and not really in a good way. Making gaming more accessible to Linux is a noble mission, but I’m not so sure that creating your own propriety operating system is the correct response either. I suppose if one thing propels the other it’s a good thing, but is there a limit to what’s supported? Will there eventually be SteamOS exclusive titles? Who knows.

SteamOS is basically a Linux operating system wrapped in the guise of Steam Big Picture mode. It works just fine until you want to play a game that isn’t widely supported, or if you want to do something that Steam just doesn’t do.

Most PC gamers use some form of software to communicate with friends while they game. Some popular examples of this would be Mumble, Teamspeak and Ventrilo. If the idea of the Steam Machine is to make PC gaming more accessible in the living room I can imagine there being a strong demand for this type of software to be natively supported on SteamOS.

Currently SteamOS has a built in voice chat function which comes packaged with Steam, this is cross platform and works anywhere you can run Steam. While this is convenient on paper I’ve never actually seen anyone use this feature. It also suffers from a number of drawbacks such as poor audio quality, and while using SteamOS you’re not actually able to invite users to a group chat unlike Windows and Mac users.

So the question remains; can you install third-party voice chat software? Yes, but it’s not simple. You need to enter the SteamOS desktop view which turns the console like interface into one most computer users would be familiar with. For this part I had to use a proper mouse and keyboard because the daisywheel was not enabled here. In order to install Mumble I had to run apt-get install mumble in the terminal after I had added the Debian repository which required me to give my system account admin privileges first. After rebooting the machine it detected my USB microphone and everything was working seemingly fine.

I like to use Push-to-Talk when using voice chat, so I assigned a shortcut key with the initial thought that I could bind a controller button to that key to activate Mumble in-game. Once everything was setup I exited the desktop and returned to the SteamOS main menu. It turns out inputs sent from the SteamOS interface to the desktop side don’t register meaning you’re unable to activate Push-to-Talk. The only workaround to this is using voice activation or open mic which is not practical for a living room environment. I tried testing this from the main menu with a keyboard instead of the controller and while playing a game, I had no luck despite my best efforts.

I feel Steam Music is a step in the right direction for inclusive SteamOS entertainment. The feature is very early beta and has a lot of room for potential. It makes for quite an awkward experience when you need to exit SteamOS and enter the Linux desktop to store your MP3s locally on the machine. I think Valve should focus on eliminating the need for the desktop mode entirely to make the experience more seamless for beginners. I would also like to see more integration with popular music streaming services such as Spotify and online radio stations such as Digitally Imported. With the way things are going with streaming services MP3’s will be obsolete by the time this is ready to ship.

After several years of usage the primary concern I have is that now the hype has gone down it feels like SteamOS has been rejected. The amount of games available for SteamOS is still lackluster and the majority of those which are supported don’t have any form of native controller support making the experience tedious. There’s also still no group voice chat, which bothers me a lot because that’s a feature you’d expect from a console.

Valve is due to make some announcements soon I’m looking forward to seeing what changes have been made to the Steam Controller since the prototype. Despite being optimistic about the device, I haven’t been able to adopt it into my regular arsenal of peripherals. The device has a very steep learning curve, and if you put it down for a week and pick it back up it feels like you’re starting from square one. I hope to see improvements to the controllers sensitivity options, along with some adjustments to the accuracy of the pads. It’s hard to gauge what the new Steam Controller will be like, but hopefully they have used the feedback they received wisely.

Big thank you to Valve for letting me test these devices, hopefully their pursuit into the hardware world doesn’t end here because this is a pretty solid first attempt.